At the end of the Wedding season it’s time for the NineDots Gathering in London. A event spread over 3 amazing days with more than 150 international Wedding Photographers. A big part from the UK but also from the Netherlands, Belgium, Germany, Israel and even Australia. With well known speakers from the Wedding Photography scene it’s always an super inspiring event. This year it was the second time I attended. 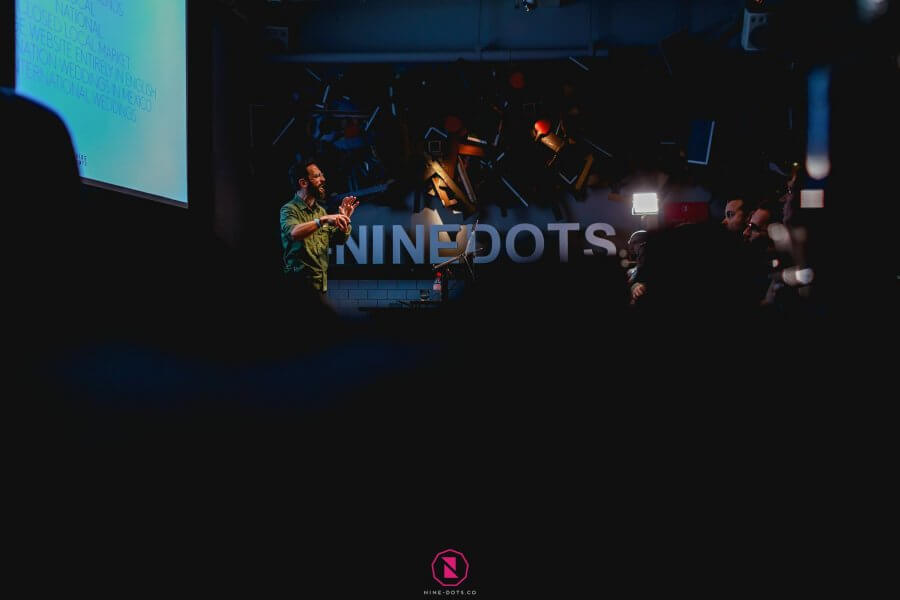 The event is held in “Bounce”; the ping pong place from London. For this reason on day one the epic ping pong tournament started. I didn’t manage to not-loose but you can’t win everything. 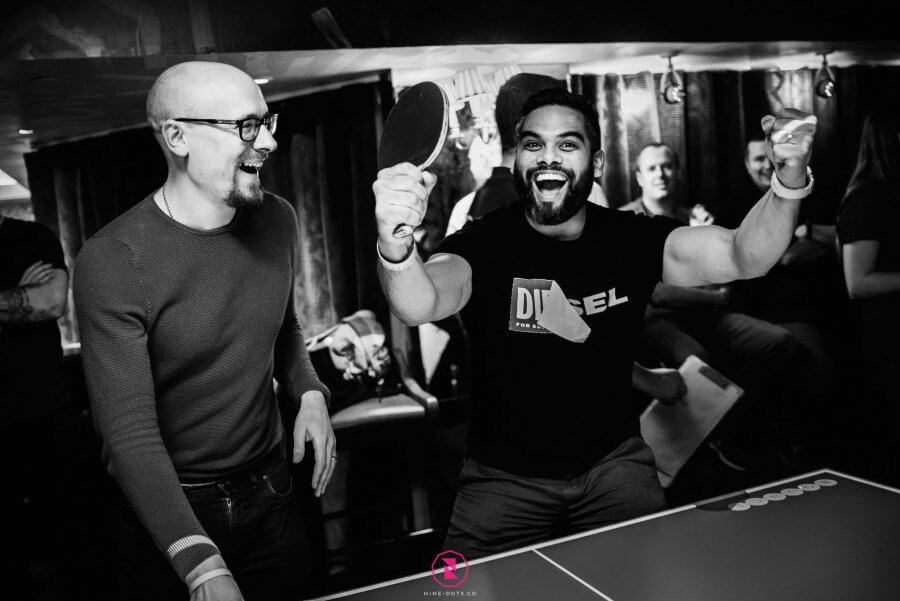 The print contest is also a nice part of the event. All participants can submit their best 3 photos, I also sent 3 which included the now familiar photo of a groom in the mirror. Even though this photo has already won 3 awards, I am super happy to see that he had achieved the top 20. On the second day the winner was announced by the jury (consisting of a number of speakers), a first place I never expected and hoped for the 4th place. But unfortunately the 4th place went to someone else. Because I knew that I would not be in the top 3, I was extra happy for those who were number 3 and 2. When the number 1 became known I was completely overwhelmed and could not control my joy (as in the top picture).

Simply the best of all those talented wedding photographers! And not even with a bride-with-an-epic-fluttering-veil-on top-a-mountain-top-in-the-Andes on the picture. The mysterious, cinematic photo won. 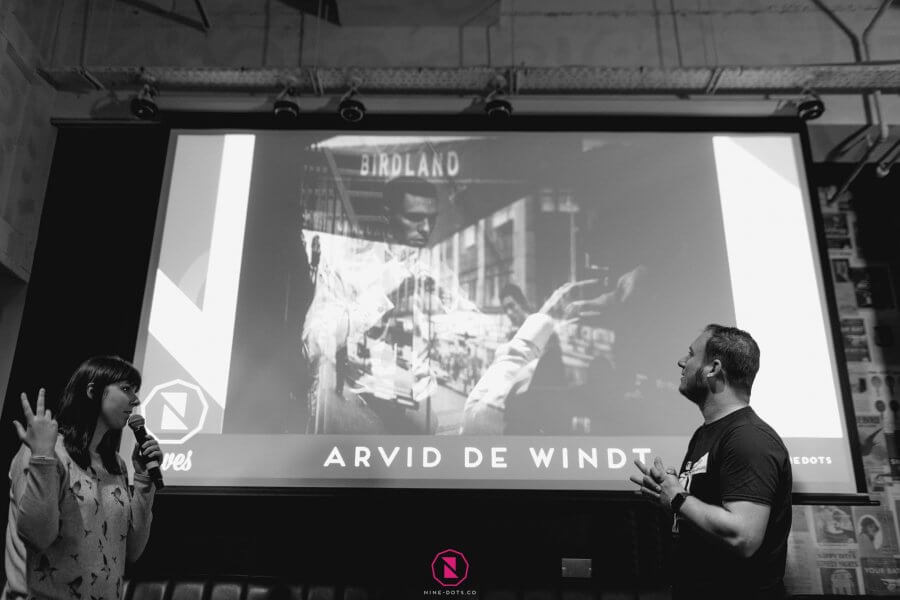 The ticket for next year is already in the pocket and 2 more weddings before we really can close the year.

This website uses cookies to improve your experience while you navigate through the website. Out of these, the cookies that are categorized as necessary are stored on your browser as they are essential for the working of basic functionalities of the website. We also use third-party cookies that help us analyze and understand how you use this website. These cookies will be stored in your browser only with your consent. You also have the option to opt-out of these cookies. But opting out of some of these cookies may affect your browsing experience.
Necessary Always Enabled
Necessary cookies are absolutely essential for the website to function properly. These cookies ensure basic functionalities and security features of the website, anonymously.
Functional
Functional cookies help to perform certain functionalities like sharing the content of the website on social media platforms, collect feedbacks, and other third-party features.
Performance
Performance cookies are used to understand and analyze the key performance indexes of the website which helps in delivering a better user experience for the visitors.
Analytics
Analytical cookies are used to understand how visitors interact with the website. These cookies help provide information on metrics the number of visitors, bounce rate, traffic source, etc.
Advertisement
Advertisement cookies are used to provide visitors with relevant ads and marketing campaigns. These cookies track visitors across websites and collect information to provide customized ads.
Others
Other uncategorized cookies are those that are being analyzed and have not been classified into a category as yet.
SAVE & ACCEPT 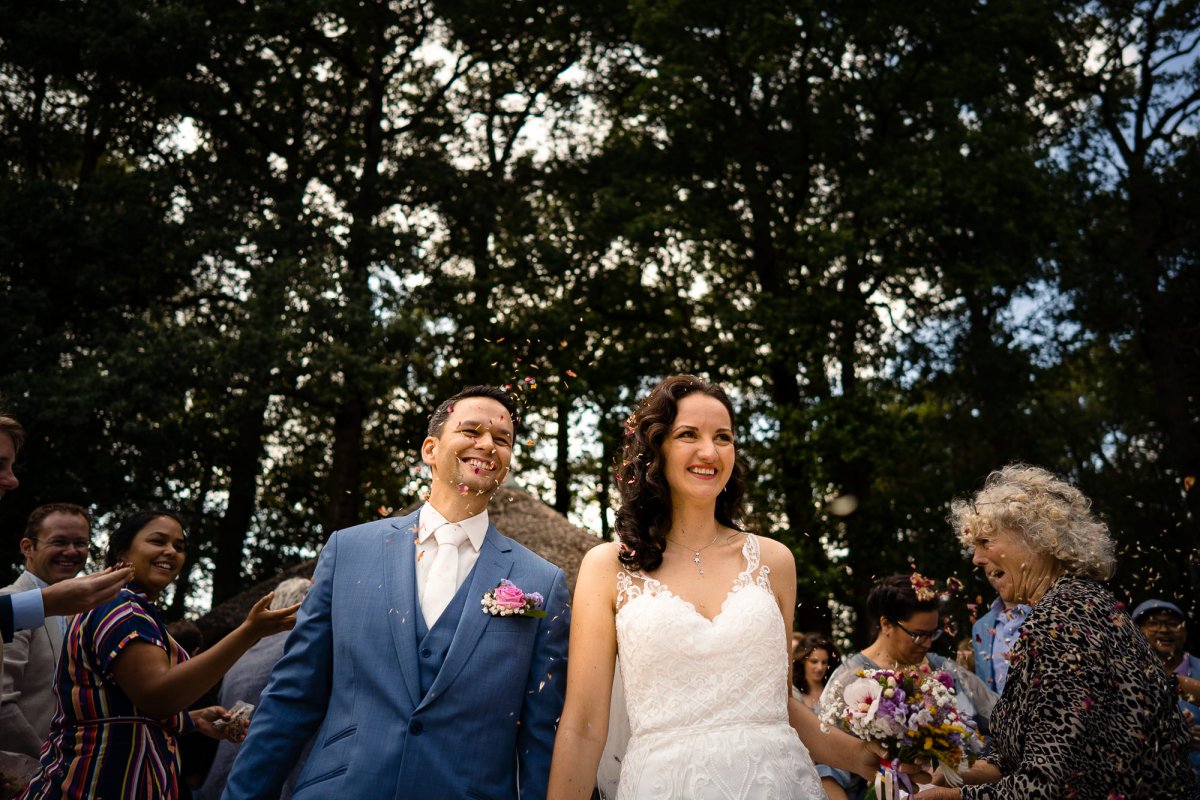